The franc was the currency of Belgium until 2002 when the euro was introduced into circulation. It was subdivided into 100 centiem (Dutch), centimes (French) or Centime (German).
The conquest of most of western Europe by revolutionary and Napoleonic France led to the French franc’s wide circulation. In the Austrian Netherlands (now Belgium), the franc replaced the kronenthaler. This was in turn replaced by the Dutch gulden when the Kingdom of the Netherlands was formed. 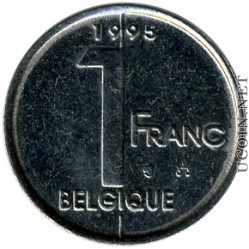 Following independence from the Kingdom of the Netherlands, the new Kingdom of Belgium in 1832 adopted its own franc, equivalent to the French franc, followed by Luxembourg in 1848 and Switzerland in 1850. Newly-unified Italy adopted the lira on a similar basis in 1862.

In 1865 France, Belgium, Switzerland and Italy created the Latin Monetary Union (to be joined by Greece in 1868): each would possess a national currency unit (franc, lira, drachma) worth 4.5 g of silver or 290.322 mg of fine gold, all freely exchangeable at a rate of 1:1. In the 1870s the gold value was made the fixed standard, a situation which was to continue until 1914.
In 1926, Belgium, as well as France, experienced depreciation and an abrupt collapse of confidence, leading to the introduction of a new gold currency for international transactions, the belga worth 5 francs, and the country’s withdrawal from the monetary union, which ceased to exist at the end of the year. The belga was tied to the British pound at a rate of 35 belgas (175 francs) = 1 pound and was thus put on a gold standard of 1 belga = 209.211 mg fine gold. The 1921 monetary union of Belgium and Luxembourg survived, however, forming the basis for full economic union in 1932. In 1935, the Belgian franc was devalued by 28% to 150.632 mg fine gold and the link between the Luxembourg and