Since the beginning of the circulation of silver and gold coins in Egypt and until 1834, no specified monetary unit existed to serve as a basis for the monetary system. Only a few of the coins were minted locally. In 1834, a Decree was promulgated providing for issuing an Egyptian currency based on a bimetallic base, gold and silver. In 1836 the Egyptian pound was minted and put into circulation.
The Monetary Reform Law issued in 1885 which set gold standard to become the basis for the Egyptian monetary system, and the country had a unified currency, the Egyptian gold pound.
It was permitted to use some foreign gold coins, particularly the Sterling pound, at fixed legal rates. The Sterling gold pound, which was valued at more than its gold content compared to other foreign gold coins, became the main medium of exchange, and the Egyptian monetary system was based on the Sterling gold standard.

In 1898 the National Bank of Egypt was established and was granted, by the government, the privilege to issue Egyptian banknotes, payable in gold for a period of 50 years. The National Bank of Egypt started issuing banknotes on the 3rd of April 1899.
Consequently, the currency circulated in Egypt consisted of gold Sterling pounds and Egyptian banknotes convertible into gold. This situation continued up to 1914 when a special Decree was issued making Egyptian banknotes a legal tender and suspending their convertibility into gold. Thus, the Egyptian pound banknote became the basic currency unit, and the base of the Egyptian monetary system was changed to fiduciary paper money standard. Accordingly, gold coins were no longer used in circulation, with the result that the volume of note issue increased from LE 11.6 million at the end of 1915 to LE 3557.0 million at the end of 1980, and further to LE 38320.0 million at the end of 1999. In 1930, for the first time in the history of Egyptian banknotes, a watermark was used in issued banknotes. This was followed, towards the end of 1968, by using a metallic thread (in notes issued by the Central Bank of Egypt) as a guarantee against counterfeit instead of dependence on complexity of colors . 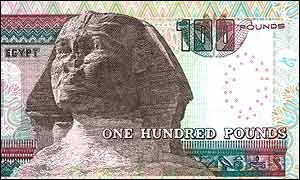 Other features against counterfeit were found in the detailed specifications of each currency. Holograms are currently added to large denomination notes.
In July 1960 the Central Bank of Egypt was established and granted the right of issuing Egyptian banknotes. Several changes were introduced with respect to the watermark, the designs shown on the notes and the colors.
The Central bank of Egypt established a printing plant for banknotes in 1968 instead of printing them abroad. The Bank also served some Arab central banks in printing their banknotes.
In 1977 The Central Bank of Egypt issued notes of 20 and 100 pounds in 1979 and 50 pounds in 1993.