The euro replaced the French Franc that had previously been the French currency.
The franc has a long history, dating back to the 14th century – it was introduced by King John II in 1360 and lasted (with a break in the middle) until the euro was introduced in 2002. 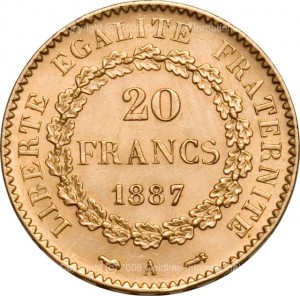 The symbol of the currency was simply ‘F’.
The franc officially ceased to exist between 1641 and 1795, following its replacement by Louis XIII with the ecu and the Louis d’Or, but the name franc remained in common usage. 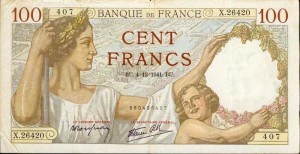 The French franc was reintroduced and became decimal in 1795, after the French revolution.
As the value of the franc diminished over the centuries, it was replaced by the ‘new’ franc in 1960, with 100 old francs being worth one new Franc. The old franc became the valid ‘centime’ coin after the devaluation of the currency, and continued to be for some years.

The coins were exchangeable to 17 February 2005 only at Banque de France, by converting their total value in francs to euros at the fixed rate of 6.55957 francs for one euro. All the banknotes were convertible up until 17 February 2012.By that date, franc banknotes worth round €550 million remained unexchanged. That allowed the French state to register the respective sum as revenue.

Forty years later, many older French still convert prices into ‘old francs’. This is complicated for us newcomers who expect to hear a price of, say, 25 euros, and get told the price is 20,000 francs!