The first boliviano was presented in 1864, equivalent to eight soles or half a scudo in the ex currency. Primarily, it was subdivided into 100 centécimos but this was changed to centavos in 1870. The amount of ten bolivianos was also called bolivar.

The boliviano was firstly pegged at a rate of one boliviano equal five french francs. On December 31, 1908, the currency was put on a new gold standard, with 12½ bolivianos equal one british pound.
Multiple exchange rates to the US dollar were established in 1940, yet the boliviano continued to drop in value. It was replaced by the peso boliviano (BOP) at a rate of one thousand to one in 1963.

The currency of Bolivia from 1 January 1963 until 31 December 1963 was the peso boliviano (BOP). It was exchanged by the boliviano at 1,000,000 pesos bolivianos equal one boliviano. The currency symbol of peso boliviano was “$b.”. Bolivia had introduced a comprehensive economic stabilization program that canceled most currency restrictions on the boliviano, which had suffered badly from inflation in December 1959. The program adopted a variable exchange rate that was finally stabilized in 1962 at 11 875 bolivianos to one US dollar.
Reform of the currency from January 1, 1963 adopted the peso boliviano, equal to 1000 bolivianos, with an initial central exchange rate of 11.875 per one US dollar. But inflation soon restored and the peso boliviano was devalued 39.4% on October 27, 1972. The new official rate was 20 per one USD, maintained until November 30, 1979, when the peso boliviano was put on a controlled float, firstly at 25 per dollar. The inflation levels speeded up and the official rate was devalued February 5, 1982 to 44 per one USD. The average exchange rate was 64.12 per dollar in 1982, 229.78 per dollar in 1983, and 2314 per dollar in 1984. During September 1985 the US dollar was worth a million pesos bolivianos on the black market. President Paz-Estenssoro proclaimed a free exchange rate for the peso, which was floated in August 1985, resulting in an operative devaluation of 95%. Every exchange control was lifted and the exchange rate was set twice weekly accordingly to current supply and demand. The value continued to drop and by January 1986 the government was setting a new exchange rate daily in an attempt to upkeep the assurance in the economy. After reaching a low of about 2.2 million per one USD, the peso stabilized and ameliorated around 1.8 to 1.9 million per dollar. 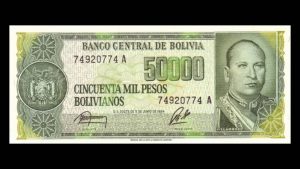 A new currency unit was the boliviano – it was created by Law No. 901 of November 28, 1986. Monetary reform was announced on December 30, 1986 becoming effective January 1, 1987. This new boliviano commuted the peso boliviano at one boliviano equal 1 000 000 pesos bolivianos.

After many years of furious inflation, the bolivian peso was exchanged in 1987 by a new boliviano at a rate of one million to one. By that time one USD was worth 1.8 to 1.9 million pesos. The new currency exchange rate was one new boliviano approximately equivalent to one USD.
The Boliviano is still manufactured abroad, in countries such as United Kingdom, France, and Chile. Even politically independent since 1825, Bolivia is in this regard after two centuries beeing not independent in many aspects, such as the monetary one, like many other ex-colonies all over the Latin America and the rest of the world.

Although Bolivia was one of the primary mints of the colonial era the printing and coining of currency suspended due to absence of political interest and on the idea that foreign made coins and bank notes could be procured at a lower price than the bolivian made.