Drachma was established on the island of Aegina during the 7 century BC. Depreciation was remarkably slow – about 50% over the following 200 years. Aristophanes (c. 448-380 BC) tells us that in his days one drachma was the average daily wage of a skilled labourer or a hoplite, while a juror earned half a drachma. Eight drachmas would buy a pair of shoes, 20 drachmas a quality tunic and 160 drachmas a slave (child slaves were a bargain at 72 drachmas). A family of four with slave spent 1,000 drachmas a year on living expenses. On the other hand, Xenophon claimed that half a drachma was the minimum required to provide a comfortable subsistence. More recently, some historians and economists estimated that in the 5th century BC a drachma had a rough value of 40 U.S. dollars (2006).
Shortly after the creation of the modern Greek state in 1827, after 400 years of Ottoman rule, a new currency was struck. The coins depicted a phoenix rising from the ashes to mark the kingdom’s new-found freedom, under President John Capodistras (1827-31). They were minted on the island of Aegina, which served as the temporary capital of the newly-founded state, where – by coincidence – the first coinage system was introduced more than 2500 years ago! 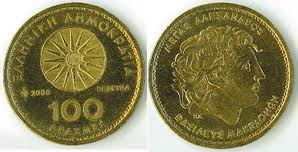 The phoenix lasted only five years, and was replaced by the traditional drachma, showing the head of the first king of the independent state, Otto. The first coinage consisted of copper denominations of 1, 2, 5 and 10 lepta, silver denominations of 1/4, 1/2, 1 and 5 drachmae and a gold 20 drachmae. The drachma coin weighed 4.5 g and contained 90% silver, with the 20 drachmae coin containing 5.8 g of gold. The drachma of King George I (1863) was made as identical as possible in size and composition to its Attic forebear. The conceit backfired badly, as throughout the 19th century the modern drachma could gain nowhere near the solidity or prestige of the ancient. In 1868, Greece joined the Latin Monetary Union and the drachma became equal in weight and value to the French franc. The new coinage issued consisted of copper 1, 2, 5 and 10 lepta coins (with the 5 lepta coin bearing the name obolos and the 10 lepta, diobolon (two obols), silver coins of 20 and 50 lepta, 1, 2 and 5 drachmae and gold coins of 5, 10 and 20 drachmae. Very small numbers of gold 50 and 100 drachmae coins were also issued.
Overspending and overborrowing precipitated a national bankruptcy in 1893. An English financial specialist, Edward Law, helped to save the drachma from huge depreciation and his labours kept the currency intact for 50 years. In 1894, cupro-nickel 5, 10 and 20 lepta coins were introduced, the 1 and 2 lepta having not been issued since the late 1870s. Silver coins were last issued in 1911 and no coins were issued between 1912 and 1922, during which time the Latin Monetary Union collapsed due to the First World War. By the time the republic was declared in 1924, the number of coins in circulation had dwindled and there was a serious shortage of cash.
It was not until the late 1940s, after almost a decade of war and civil war, that the drachma again inflated with a vengeance. Inflation during World War II was dramatic in the extreme. In January 1941, 1 british pound was worth 1,200 drachma. By October 1944 that had spiralled to 1,219 billion drachmas. As in other countries, it required basketfuls of flimsy notes with a lot of zeros on them to buy basic provisions. A currency reform introduced a new drachma which was worth 50 billion of the old variety but nevertheless inflation continued.

In an effort to halt the inflation, Greece joined the Bretton Woods system in 1953. In 1954 the drachma was revalued for a second time at a rate of 1000 to 1 and the Finance Minister, Spyros Markezinis, dealt with the problem Alexander-fashion by chopping off three zeros. The new currency was pegged at 30 drachmae = 1 US dollar. Artists and writers who settled on the Greek islands in the inflation-free 1960s and early 1970s marvelled at how far the humble drachma – like the olive a symbol of national frugality – could stretch. In 1973, the Bretton Woods System was abolished and over the next 25 years the official exchange rate gradually declined due to growing urbanisation and EU-fuelled prosperity. Renewed inflation resulted in the exchange rate reaching 400 GRD = 1 USD and the situation was brought under control only in 1997, thanks to determined supply-side policies by the Government.

The euro did not begin circulating until 2002 but the exchange rate was fixed on 19 June 2000, with legal introduction of the euro taking place in January 2002.