The Gulden or forint was the currency of the lands of the House of Habsburg between 1754 and 1892 (known as the Austrian Empire from 1804 to 1867 and the Austro-Hungarian Empire after 1867). With the introduction of the Conventionsthaler in 1754, the Gulden was defined as half a Conventionsthaler, equivalent to 1/20 of a Cologne mark of silver and subdivided into 60 Kreuzer. The Gulden became the standard unit of account in the Habsburg Empire and remained so until 1892. 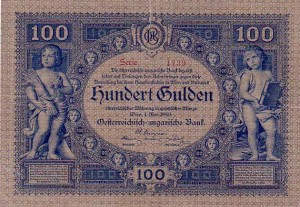 It was replaced by theKrone as part of the introduction of the gold standard.

It was the official currency of the Austro-Hungarian Empirefrom 1892 until the dissolution of the empire in 1918.

After several earlier attempts the Austro-Hungarian Empire adopted the gold standard in 1892 according to the plan of Sándor Wekerle minister of finance. This plan included the introduction of the new currency, the Krone. The value of the Krone was set at 2 Kronen = 1 Gulden (Florin, or forint in Hungarian) of the previous silver-based currency. From 1900 onwards, Krone notes were the only legal banknotes of the Empire. 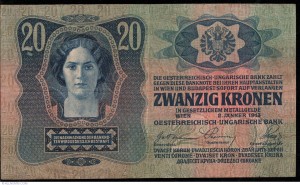 The value of the currency depreciated sharply as a result of the First World War, which was financed mostly by the issue of War Bonds rather than through taxation. Consumer prices rose sixteenfold during the war, as the government had no hesitation in running the Austro-Hungarian Bank’s printing presses to pay its bills and triggering a higher inflation rate than in the other combatant countries.

It was the replacement currency of theAustro-Hungarian Krone amongst the boundaries of the newly created post-World War I Hungary. It suffered aserious inflation and was replaced by the pengő in 1925. The last korona banknotes were withdrawn from circulation in 1927. 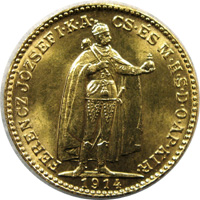 The pengő was the currency of Hungary between 1 January 1927, when it replaced the korona. The pengő was subdivided into 100fillér. Although the introduction of the pengő was part of a post-World War I stabilisation program, the currency survived for only 20 years and experienced the most serious hyperinflation ever recorded.

After the First World War, according to the Treaty of Saint-Germain, the Austro-Hungarian Bank (the joint bank of the Monarchy) had to be liquidated and the Austro-Hungarian krone had to be replaced with a different currency, which in the case of Hungary was the Hungarian korona. This currency suffered a high rate of inflation during the early 1920s. A stabilisation program covered by League of Nations loan helped to bring down inflation, and the korona could be replaced in 1 January 1927 by a new currency, the pengő, which was introduced by Act XXXV of 1925 It was valued at 12,500 korona, and defined as 3,800 to one kilogram of fine gold – which meant that the pengő was pegged to the gold standard, however, without exchange obligation. In the beginning the cover ratio (which included gold and – to 50% – foreign exchange) was fixed at 20% which had to be raised to 33.3% within five years. This goal was reached quickly: the cover ratio was 51% in 31 July 1930. Later it decreased somewhat due to the economic and financial crisis caused by the Great Depression.

The forint is the currency of Hungary.  The introduction of the forint on 1 August 1946 was a crucial step of the post-WWII stabilization of theHungarian economy, and the currency remained relatively stable until the 1980s. Transition to market economy in the early 1990s deteriorated the value of the forint, inflation peaked at 35% in 1991. Since 2001, inflation is single digit and the forint was declared fully convertible. As a member of the European Union, the long term aim of the Hungarian government is to replace the forint with the euro

The forint’s name comes from the city of Florence, where golden coins were minted from 1252 called fiorino d’oro. In Hungary, florentinus, also a gold-based currency, was used from 1325 under Charles Robert and several other countries followed its example.

Between 1868 and 1892 the forint was the name used in Hungarian for the currency of the Austro-Hungarian Empire, known in German as the gulden or florin.

The forint was reintroduced on 1 August 1946, after the pengő was rendered almost worthless by massive hyperinflation in 1945-46—the highest ever recorded. The process was managed by the Hungarian Communist Party, which held the relevant cabinet seats. The forint’s success was exploited for political gains, contributing to the Communists’ takeover of complete power in 1948-49. The forint replaced the pengő at the rate of 1 forint = 4×1029 pengő—dropping 29 zeroes from the old currency. In fact, this was an imaginary exchange rate. With the highest value note being 100 million B. pengő (1020 pengő), the total amount of pengő in circulation had a value of less than 0.1 fillér. Of more significance was the exchange rate to the adópengő of 1 forint = 200 million adópengő.

Historically the forint was subdivided into 100 fillér, although fillér coins have been rendered useless by inflation and have not been in circulation since 1999. The Hungarian abbreviation for forint is Ft, which is written after the number with a space between. The name fillér, the subdivision of all Hungarian currencies since 1925, comes from the German word Heller. The abbreviation for the fillér is f, written also after the number with a space in between. 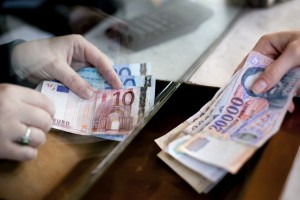 After its 1946 introduction, the forint remained stable for several years, but started to lose its purchasing power as the state-socialist economic system lost its competitiveness during the 1970s and 1980s. After the democratic change of 1989-90, the forint saw yearly inflation figures of app. 35% for three years, but significant market economy reforms helped stabilize it. Since year 2000 the relatively high value of forint handicaps the strongly export-oriented Hungarian industry against foreign competitors with lower valued currencies.

As part of Hungary’s integration into the European Union and its euro currency, the forint may be replaced by the euro, depending on the economic situation.