The lira (plural lire) was the currency of the Italy between 1861 and 2002. Between 1999 and 2002, the Italian lira was officially a “national subunit” of the euro. However, physical payments could only be made in lire, as no euro coins and notes were available.
The lira was also the currency of the Napoleonic Kingdom of Italy between 1807 and 1814.

The term originates from the value of a pound weight of high purity silver and as such is a direct cognate of the British pound sterling; in some countries, such as Cyprus and Malta, the words lira and pound were used as equivalents, before the eurowas adopted in 2008 in the two countries. “L”, sometimes in a double-crossed script form (“?”), was usually used as the symbol. Until the Second World War, it was subdivided into 100 centesimi (singular: centesimo), which translates to “one hundredth”.
The Napoleonic Kingdom of Italy issued coins between 1807 and 1813 in denominations of 1 and 3 centesimi and 1 soldo in copper, 10 centesimi in 20% silver alloy, 5, 10 and 15 soldi, 1, 2 and 5 lire in 90% silver and 20 and 40 lire in 90% gold. All except the 10 centesimi bore a portrait of Napoleon, with the denominations below 1 lira also showing a radiate crown and the higher denominations, a shield representing the various constituent territories of the Kingdom.
In 1861, coins were minted in Florence, Milan, Naples and Turin in denominations of 1, 2, 5, 10 and 50 centesimi, 1, 2, 5, 10 and 20 lire, with the lowest four in copper, the highest two in gold and the remainder in silver. In 1863, silver coins below 5 lire were debased from 90% to 83.5% and silver 20 centesimi coins were introduced. Minting switched to Rome in the 1870s.
Apart from the introduction in 1894 of cupro-nickel (later nickel) 20 centesimi coins and of nickel 25 centesimi pieces in 1902, the coinage remained essentially unaltered until the First World War. 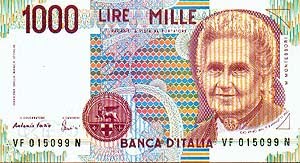 In 1919, with a purchase power of the lira reduced to 1/5 of that of 1914, the production of all earlier coin types except for the nickel 20 centesimi halted, and smaller, copper 5 and 10 centesimi and nickel 50 centesimi coins were introduced, followed by nickel 1 and 2 lire pieces in 1922 and 1923, respectively. In 1926, silver 5 and 10 lire coins were introduced, equal in size and composition to the earlier 1 and 2 lire coins. Silver 20 lire coins were added in 1927.
In 1936, the last substantial issue of silver coins was made, whilst, in 1939, moves to reduce the cost of the coinage lead to copper being replaced by aluminium bronze and nickel by stainless steel. All issuance of coinage came to a halt in 1943.
In 1951, the government again issued notes, this time simply bearing the title “Repubblica Italiana”. Denominations were of 50 and 100 lire (replacing the Bank of Italy notes) and they circulated until coins of these denominations were introduced in the mid 1950s. In 1966, 500 lire notes were introduced (again replacing Bank of Italy notes) which were produced until replaced in 1982 by a coin.
In 1967, 50,000 and 100,000 lire notes were introduced by the Bank of Italy, followed by 20,000 lire in 1975 and 500,000 lire in 1997.

The minting of Italian lira coins was suspended in 1999 and the euro was officially introduced in Italy on 1 January 2002. Italian euro coins have a layout different to each denomination, although there are a lot of themes of works by one of the most famed and known Italian artists.

Every coin is created by a different designer, from the one cent to the two euro coin they are – Eugenio Driutti, Luciana De Simoni, Ettore Lorenzo Frapiccini, Claudia Momoni, Maria Angela Cassol, Roberto Mauri, Laura Cretara and Maria Carmela Colaneri. All of them feature the 12 stars of the EU, the year of imprint, the overlapping letters “RI” for Repubblica Italiana or Italian Republic and the letter R for Rome. There are no Italian euro coins dated earlier than 2002, even though they were certainly minted earlier, as they were first introduced in circulation to the public in December 2001.