The ruble has been the currency in Russia for 500 years. The name ‘rouble’ is thought to come from the Russian for ‘chop,’ literally referring to the way a section was cut off a silver ingot, which was the very first incarnation of the currency, with each section holding a different value depending on its weight.
There is no official symbol for the rouble although many options have been suggested over the years, including a ‘P’ with two horizontal stripes. However, the abbreviation ‘???’ is often used in writing.
In 1710 the rouble was first divided into kopecs, 100 of which made up a rouble. Ten roubles are sometimes referred to as ‘chervonets’, in reference to the Soviet gold chervonets issued in 1923 that were the equivalent value.
There have been seven different incarnations of the rouble, due to various drastic changes in the currency’s value, with the most recent being released in 1998.
The FIRST rouble was in place for over 200 years up to 1921 when it fell dramatically in value. 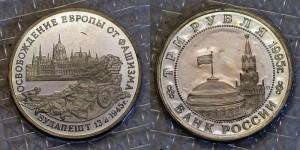 The SECOND rouble was the first in the series of redenominations, swapping one ‘new’ rouble for 10,000 ‘old’ roubles. These were introduced in 1922.
A quick redenomination took place the year after, valuing the new rouble at 1 to 100 of the former roubles. This was the THIRD rouble.
In 1924, the FOURTH rouble, known as the ‘gold rouble’, was introduced and lasted until 1947. This one was valued at 50,000 of the previous issue of the rouble.
After the Second World War the government attempted to reduce the amount of money in circulation by imposing a confiscatory redenomination on paper money, which valued the new rouble at one tenth the value of the fourth rouble.
From 1961 to 1997, the SIXTH rouble was in circulation and the redenomination was based on the same terms as the 1947 redenomination. After the fall of the Soviet Union in 1991, the rouble remained the currency of the Russian Federation. During the early 1990s there was a period of hyper-inflation which meant the currency fell significantly in value.
In January 1998 the seventh rouble was introduced. It was valued at 1,000 of the previous roubles in what was simply a psychological step. Later in the same year, the rouble lost 70% of its value against the US dollar in just six months following the Russian financial crisis of 1998.

In the 18th century, the lower value roubles, such as half a kopek or a single kopec were made from copper, while five kopecs up to 50 kopecs and one rouble coins were made from silver. Five rouble coins were originally made from gold.
After the Russian civil war, silver was used for lower value coins with gold chervonets minted in 1923. In 1961 new materials such as aluminium bronze were introduced, along with cupro-nickel-zinc.
In 1991 more modern techniques were used, combining several types of metal to form new, bimetallic coins in denominations including ten roubles. New coins were again released after the fall of the Soviet Union in 1991.
Between 1769 and 1917 there were only Imperial issued bank notes, or ‘assignats.’ After 1917 the provisional government issued bank notes, called Kerenki. Soon after, in 1918 state credit notes were issued by the RSFSR, followed by currency notes the following year.