The budju was the currency of Algeria until 1848. It was subdivided into 24 muzuna, each of 2 kharub or 29 asper. It was replaced by the franc when the country was occupied by France. 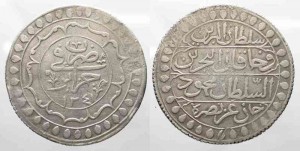 The franc replaced the budju when France occupied the country. It was equivalent to the French franc and was revalued in 1960 at a rate of 100 old francs = 1 new franc to maintain the equivalence. The new franc was replaced at par by the dinar in 1964 following Algerian independence granted by France in 1962.

The franc was the currency of Algeria between 1848 and 1964. It was subdivided into 100 centimes.

The dinar was introduced on 1 April 1964, replacing the Algerian new franc at par. It is the currency of Algeria and it is subdivided into 100 santeem.

In 1964, coins in denominations of 1, 2, 5, 10, 20 and 50 santeem, and 1 dinar were introduced, with the 1, 2 and 5 santeem struck in aluminium, the 10, 20 and 50 santeem in aluminium bronze and the 1 dinar in cupro-nickel. The obversesshowed the emblem of Algeria, while the reverses carried the values in Eastern Arabic numerals. In later decades, coins were issued sporadically with various commemorative subjects