With the establishment of the first colony of New South Wales in 1788, the need for currency soon became apparent. Convicts received no wages and the early settlers and military personnel had their needs supplied from communal stores. With only a small quantity of English and foreign coins brought with the First Fleet, most of the dealings in the first few years consisted of bartering, with rum being the main means of exchange.

Handwritten notes of credit, issued by government officials and backed by the English treasury, were a common form of currency, but these were subject to counterfeiting and devaluation. The earliest currency used was English money, and also the Spanish dollar brought by the early ships. Because of the shortage of English money, and to prevent the Spanish dollars being taken back on the ships, Governor Macquarie had their centres cut out and they became known as ‘holey dollars’, while the cores became ‘dumps’. In 1813 they had “New South Wales 1813” stamped on them, with “Five Shillings” on the reverse side. The ‘dump’ had “New South Wales 1813” stamped on their cleaned and smoothed surface with “Fifteen Pence” on the reverse side. 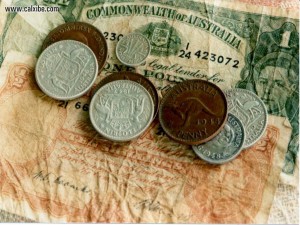 In 1817 the Bank of New South Wales was established. The first issue of banknotes comprised five shillings, ten shillings, one pound and five pounds and paper tokens for one shilling, one shilling and sixpence, two shillings, and two shillings and sixpence. In 1825 the British Government imposed the sterling standard throughout its Empire and English coins were minted in Australia.

Decimal currency was introduced on 14 February 1966. Dollars and cents replaced the pounds, shillings and pence. The new coinage consisted of silver and bronze. In 1996 Australia’s paper based notes were converted to polymer in an effort to prevent counterfeiting. The technology which produced the notes was developed in Australia. The 5c, 10c, 20c and 50c coins are made of 75% copper and 25% nickel. The $1 and $2 coins are made of 92% copper, 6% aluminium and 2% nickel.

With pounds, shillings and pence to be replaced by decimal currency on 14 February 1966, many names for the new currency were suggested. In 1965, the Prime Minister, Sir Robert Menzies, a monarchist, wished to name the currency the royal. Other proposed names included more exotic suggestions such as the austral, the oz, the boomer, the roo, the kanga, the emu, the digger, the Quid.

In 1967, Australia effectively left the sterling area, when the pound sterling was devalued against the US dollar and the Australian dollar did not follow. It maintained its peg to the US dollar at the rate of A$1 = US$1.12.
On 27 September 2012, the Reserve Bank of Australia stated that they had ordered work on a project to upgrade the current notes. It stated this was necessary because of the addition of many new security features but declined to state any. It is expected to take several years for the notes to be issued.