The pound sterling was originally divided into twenty shillings, and it is normal to consider the shilling sterling to be a subsidiary unit of the pound. However, in British East Africa, even though twenty shillings were equal in value to one pound sterling, the shilling was always taken to be the primary unit of account. This state of affairs was unique amongst all the parts of the British Empire that used the sterling currency.
This anomalous state of affairs arose because British East Africa was actually originally in the rupee zone and not in the sterling zone. The East African shilling was introduced to Kenya, Tanganyika (now mainland Tanzania), and Uganda in 1921, replacing the short-lived florin at a rate of 2 shillings = 1 florin. The short lived Florin had been brought about as a result of the rising price of silver which occurred in the wake of World War I. At that time, the Indian Rupee was the currency of the British East African states. The Rupee, being a silver coin rose in value against sterling. When it reached the value of two shillings, the authorities decided to replace it with the Florin. From the florin thence came the East African shilling. The currency remained pegged to one shilling sterling and was subdivided into 100 cents. In 1936, Zanzibar joined the currency board, and the Zanzibari rupee was replaced at a rate of 1.5 East African shillings = 1 Zanzibari rupee. It was replaced by local currencies (Kenyan shilling, Ugandan shilling and Tanzanian shilingi) following the colonies’ independence. 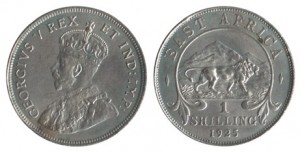 In 1951, the East African shilling replaced the Indian Rupee in the Aden colony and protectorate, which became the South Arabian Federation in 1963. In 1965, the East African Currency Board was breaking up, and the South Arabian dinar replaced the shilling in the South Arabian Federation at a rate of 20 shillings to 1 dinar.
The shilling was also used in parts of what is now Somalia, Ethiopia and Eritrea when they were under British control. Before 1941, these areas, then known as Italian East Africa were using the Italian East African lira. In 1941, as a result of World War II, Britain regained control and introduced the shilling, at a rate of 1 shilling to 24 lira. Italian Somaliland was returned to Italy in 1949 as a UN Trusteeship and soon switched to the Italian Somaliland somalo, which was at par with the shilling. British Somaliland gained independence in 1960, and joined what had been Italian Somaliland to create Somalia. In that year Somalia began using the Somali shilling (replacing the Somali somalo) at par with the East African shilling. The East African shilling ceased to be legal tender in Somalia during 1961. Ethiopia regained independence in 1941, with British support and began using the East African shilling. Maria Theresa Thalers, Indian rupees, and Egyptian pound were also legal tender at the beginning of this time, and it is unclear exactly when this status ended. Full sovereignty was restored in late 1944, and the Ethiopian birr was reintroduced in 1945 at a rate of 1 birr = 2 shillings. Eritrea was captured from the Italians in 1941, and began using the East African shilling, as well as the Egyptian pound, with the lira demonetized in 1942. When Eritrea formed a federation with Ethiopia in 1952, the birr, which was already in use in Ethiopia, was adopted in Eritrea.
For a wider history surrounding currency in the region, see The History of British Currency in the Middle East. 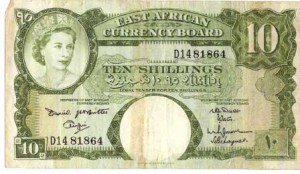