The History of U.S. Paper Money – In the early days of the nation, before and just after the revolution, Americans used English, Spanish, and French money.
1690 Colonial Notes
The Massachusetts Bay Colony issued the first paper money in the colonies which would later form the United States. 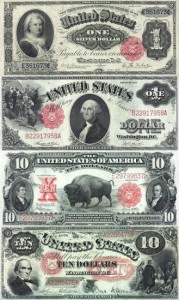 1775 Continental Currency
American colonists issued paper currency for the Continental Congress to finance the Revolutionary War. The notes were backed by the “anticipation” of tax revenues. Without solid backing and easily counterfeited, the notes quickly became devalued, giving rise to the phrase “not worth a Continental.”

1781 Nation’s First Bank
Also to support the Revolutionary War, the continental Congress chartered the Bank of North America in Philadelphia as the nation’s first “real” bank.

1785 The Dollar
The Continental Congress determined that the official monetary system would be based on the dollar, but the first coin representing the start of this system would not be struck for several years.

1791 First U.S. Bank
After adoption of the Constitution in 1789, Congress chartered the First Bank of the United States untill 1811 and authorized it to issue paper bank notes to eliminate confusion and simplify trade. The bank served as the U.S. Treasury’s fiscal agent, thus performing the first central bank functions.

1792 Monetary System
The federal monetary system was established with the creation of the U.S. Mint in Philadelphia. The first American coins were struck in 1793.

1836 State Bank Notes
With minimum regulation, a proliferation of 1,600 local state-chartered, private banks now issued paper money. State bank notes, with over 30,000 varieties of color and design, were easily counterfeited. That, along with bank failures, caused confusion and circulation problems.

1861 Civil War
On the brink of bankruptcy and pressed to finance the Civil War, Congress authorized the United States Treasury to issue paper money for the first time in the form of non-interest bearing Treasury Notes called Demand Notes.

1862 Greenbacks
Demand Notes were replaced by United States Notes. Commonly called “Greenbacks,” they were last issued in 1971. The Secretary of the Treasury was empowered by Congress to have notes engraved and printed, which was done by private banknote companies.

1865 Secret Service
The Department of the Treasury established the United States Secret Service to control counterfeits, at that time amounting to one-third of circulated currency.

1866 National Bank Notes
National Bank Notes, backed by U.S. government securities, became predominant. By this time, 75 percent of bank deposits were held by nationally chartered banks. As State Bank Notes were replaced, the value of currency stabilized for a time.

1910 Currency Production Consolidated
The Department of the Treasury’s Bureau of Engraving and Printing assumed all currency production functions, including engraving, printing, and processing.

1929 Standardized Design
Currency was reduced in size by 25 percent and standardized with uniform portraits on the faces and emblems and monuments on the backs.

1957 In God We Trust
Paper currency was first issued with “In God We Trust” as required by Congress in 1955. The inscription appears on all currency Series 1963 and beyond.

1990 Security Thread and Microprinting
A security thread and microprinting were introduced, first in $50 and $100 notes, to deter counterfeiting by advanced copiers and printers.