Real had been an important currency in the South American continent for a very long time. The currency was first used by the Portuguese explorers who first settled in the new world and also by the Dutch in around mid 17th century when they occupied some part of Brazil.

Currently, real is the official currency of Brazil and that is why it is called the Brazilian real. The currency is denoted with the symbol “R$” and was adopted as country’s official currency in as early as 1690 till 1942 and was re-implemented on July 1, 1994. The Brazilian real has BRL as its currency code and 986 as its numeric code according to the ISO 4217 regulation. Real in plural terms is called “reais” and it replaced the interim currency “cruzeiro”. The currency is divided into 100 equal subunits named “centavo” i.e. “centavos” in plural terms.
The history of the Brazilian real dates back to the early 16th century, the time when the new world was discovered courtesy Christopher Columbus and the Europeans started coming and settling on this new land. The concept of real as a currency was a Portuguese concept and later on picked up by the Dutch settlers who made the currency official in 1654. An interesting fact about the currency is at that time real did not have any subdivisions. It was made the official currency of Brazil in 1690 and since then it served as the legal tender in the country till 1942. All this while when Brazil faced huge changes initially being a colony to the various European countries, then as an imperial state and finally when it converted into a republic in 1889, the Brazilian real also underwent many changes. 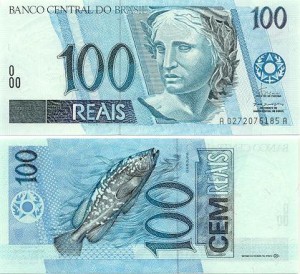 The major change that affected the currency adversely during its long life span was inflation and due to extreme levels of inflation in real, even its base unit got shifted from 1 real to 1000 r