“Peso” is a Spanish word, meaning “weight” and is termed as a unit of currency in the current scenario. Peso is quite a dominant currency in the South American continent as it forms part of the national currencies of most of the countries in the continent such as Argentina, Chile, Colombia, Dominican Republic, Mexico, Uruguay and also Cuba and Philippines. Peso is used since the time as early as the colonial times when it referred to a Spanish coin, which was equivalent to 8 reales. 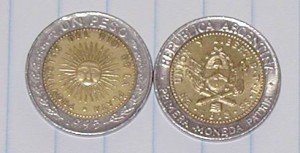 Argentine peso is a currency that has been making its way through hard struggle due to the frequent crises that had struck Argentina’s economy time and again. Contrastingly, peso was one of the most popular and highly traded currencies at one time. Among many economic crises that the country had been through, the toughest of them is said to be the one that struck in 1999 as the nation’s trade partner countries Mexico and Brazil were also into serious economic crisis. It led to the currency’s discontinuation of its peg to the US dollar and it was floated. Even floating the currency was not sufficient enough for the stabilization of its value and it depreciated to as low as about 80% of its value. The currency still maintains its exchange rate at around 4 pesos per dollar when before 2002 it was equivalent to the value of the dollar.
Peso was a currency of Spanish empire since the Spanish currency reforms in 1497. The country, with time, gained power and spread its area through acquiring colonies and states like other powerful European countries that resulted in making peso a world popular currency. the Spanish peso was adopted as the legal tender throughout its colonies, many of them were among the new world countries including Argentina. At that time, peso was known as the 8 reales coin.
In 1816, Argentina declared itself independent following the defeat of the Spanish king Fernando VII with the hands of Napoleon. Independent Argentina started to issue its own currency that was denominated in reales, soles and escudos. In 1826, two versions of Argentine peso were induced one of them being convertible and the other being unconvertible and were called “Peso Fuerte” and “Peso Moneda Corriente”. These version of the currency operated till 1881 when the both of them were converted into a single currency i.e. “Peso Moneda Nacional”. With this conversion, the currency was officially decimalized with the announcement of a fixed exchange rate that was 1 peso moneda nacional = 1 peso fuerte = 25 peso moneda corriente = 8 reales. Initially the coin for 1 unit of the new currency was made from silver known as patacon but the economic crisis in 1890 made sure that silver coin to be changed to any other metal. Also, paper currency that was convertible into gold termed as “peso oro sellado” was issued in 1881 but it had to be with drawn in 1929.

Peso moneda nacional remained the currency of the country till 1969 and in 1970 it was taken over by a new version of peso i.e. “Peso ley”, the conversion rate being 1 peso ley = 100 peso moneda nacional. In 1983, the political system of Argentina was transformed into a democratic framework and that resulted in the introduction of a new peso currency “Peso Argentino” @ 1 peso argentino = 10000 peso ley. But soon after in 1985, it was replaced yet again by a new currency “Austral” as it itself lost its value drastically. Austral replaced peso argentino @ 1 austral = 1000 pesos. During the short life span of the austral, it suffered from hyperinflation, that resulted in steep rise of prices even up to 200% in a month and constant downfall of the value of currency. in 1992, with the election of the new president, the value of austral was stabilized and peso convertible was made the national currency of the Argentina. It was directly pegged to the US dollar @ 1 peso = 1 US dollar. Unluckily the country was again struck with an economic crisis in 1999 and it resulted in the abandonment of the fixed exchange rate system and since then, Argentine peso float its way and the value of the currency is derived from the market situations.