The currency of Mexico is mexican peso. Modern peso and dollar currencies have a common origin in the 15th–19th century Spanish silver dollar.

The peso was originally the name of the eight-real coins issued in Mexico by Spain. These were the so-called Spanish dollars or pieces of eight in wide circulation in the Americas and Asia from the height of the Spanish Empire until the early 19th century.

After Mexico gained its independence in 1821, the new government continued the Spanish monetary system of 16 silver reales = 1 gold escudo, with the peso of 8 reales the largest silver coin. They have also issued paper money, denominated in pes.

Throughout most of the 20th century, the Mexican peso remained one of the more stable currencies in Latin America. Its becouse the economy did not experience periods of hyperinflation like the other countries in the region. 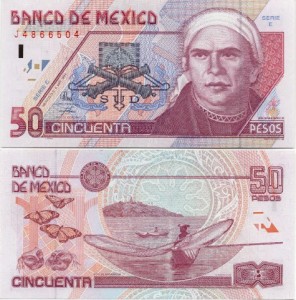 However, after the Oil Crisis of the late 1970s, Mexico defaulted on its external debt in 1982, and as a result the country suffered a severe case of capital flight, followed by several years of inflation and devaluation, until a government economic strategy called the “Stability and Economic Growth Pact” (Pacto de estabilidad y crecimiento económico, PECE) was adopted under President Carlos Salinas.

On January 1, 1996, the modifier nuevo was dropped from the name and new coins and banknotes – identical in every respect to the 1993 issue, with the exception of the now absent word “nuevo” – were put into circulation. In 1996, the word nuevo(s) was removed from the coins. New 10 pesos were introduced with base metal replacing the silver centre.

Stability of the Mexican economy helped and the growth in foreign investment, the Mexican peso is now among the 15 most traded currency units in recent years. Since the late 1990s the peso has traded at about 9 to 15 pesos per U.S. dollar.

In 2003 the Bank of Mexico began the gradual launch of a new series of bimetallic $100 coins. These number 32 – one for each of the nation’s 31 states, and one for theFederal District. While the obverse of these coins bears the traditional coat of arms of Mexico, their reverses show the individual coats of arms of the component states. The first states to be celebrated in this fashion were Zacatecas, Yucatán, Veracruz, and Tlaxcala. In circulation they are extraordinarily rare, but their novelty value offsets the unease most users feel at having such a large amount of money in a single coin. The Bank has tried to encourage users to collect full sets of these coins, issuing special display folders for the purpose, but the high cost involved has worked against them. Bullion versions of these coins are also available, with the outer ring made of gold, instead of aluminium bronze.