The currency of Uruguay was initially that common to all of the Spanish America. In the struggle over this region, primarily between Spain and Portugal, later on between Argentina and Brazil, the coinage of both rivals circulated. The area was annexed to Brazil in 1821 as Provincia Cisplatina, the Portuguese (Brazilian) administration put notes of Banco do Brazil into circulation. This was the first paper money to circulate in Uruguay. After that, in 1826–1828, argentine troops fighting against Brazil were paid in one-peso notes issued by Banco Nacional of Buenos Aires for Provincia Oriental.
All sides to the conflict used the Spanish dollar (Spanish peso, Portuguese patacão), which circulated with a value of 8 Spanish reales or 960 Brazilian reis. Circulation consisted of coins from mints in Mexico, Potosí, Brazil, and Buenos Aires. In the turbulent period of conflict prior to independence, a significant amount of poor-quality copper coins from both Buenos Aires and Brazil came into circulation.

Uruguay’s currency was based on the silver peso of eight reales, mostly known as the patacón, and the gold onza de oro, priced at 16 pesos silver. But a massive quantity of devaluate copper coins also circulated. Lacking the resources to implement a national coinage, Gen. José Rondeau’s provisional government allowed foreign silver and gold coin to circulate freely (Law of 4 October 1828) at its intrinsic value, but it limited and after that forbidden the import of copper coin and the circulation of Buenos Aires bank notes (March 1829).
Gen. Fructuoso Rivera demonetized all copper coin in circulation, the coppers ceased to be legal tender for individuals and would be neither received nor paid out by public offices after January 1831. After that, it was withdrawn at one patacón in silver or gold for 13 reales in copper.
Тo achieve slight change, the government obtained Buenos Aires coins of one-tenth real, and put about 1.6 million of them into circulation at half face value. This is known the first money issued by República Oriental del Uruguay.
The government established a new monetary system in 20 June 1839, famous as Sistema real, with accounts kept in a patacón (peso) of 8 reales, each of 100 centésimos. The patacón was a silver coin, 27.06 g. The standard gold coin was the onza de oro of 27·06 g, equal to 16 silver pesos. Different gold and silver coins were rated in terms of the patacón and onza, according to their domestic value.
According to law 208, it is authorized to mint 20,000 pesos in copper coin, but only about 500 pesos in coins, dated 1840, were really produced. The government set the first of these coins into circulation on 15 October 1840 and, since 1990, Uruguay has celebrated 15 October as “Día de la Numismática Nacional”.
On 13 of December 1843, copper coins and a silver peso were authorized by laws 254 and 255, in Uruguay’s long civil war, famous as La Guerra Grande. The government established a mint – La Casa de Moneda de Montevideo, that fabricate three copper denominations and a silver peso fuerte or peso del Sitio or Montevideo dollar in english.

The National Currency Decree of 23 June 1862 made the gold doblón and the silver peso the national currency. It defined the doblón de oro, which exchanged the onza de oro. The peso was revalued to 100 centésimos, with 1 new centésimo equal to 10 old centésimos de real, the new currency being known as Sistema centesimal as opposed to the old Sistema real.
The National Currency Decree declared that until a national coinage could be minted, external silver and gold coins should keep circulate at thereupon current values. A quantity of foreign coins with their multiples and fractions, were specified and rated.
In February 1864 new postage stamps of 6, 8, 10, and 12 centésimos replaced the old denominations of 60, 80, 100.
Uruguay was in a state of disturbance and civil struggle. There were multiple runs on the banks. In January 1864 Mauá Bank experienced a brief run – it floated a loan for the government of Gen. Flores in December, and when it suffered another run in 1865, the government suspended specie payments for the two note-issuing banks and demanded forced loans. Banco Comercial showed its stability through the panic that followed. After the crisis, a new banking law was proceed, which was the signal for a boom in bank creation.In June suspension of convertibility ended.
The Overend Gurney crisis on the London financial market in May 1866 hit Uruguay, where Mauá Bank experienced another run. The government owed it large amaunts and came to its support by suspending banknote convertibility into specie until 1 December 1866. Banco Comercial and Londres y Río de la Plata were solid and did not need this cover, so when another major crisis occurred in 1868 and the government again suspended convertibility, they kept paying out gold for their notes. An economic revival followed, only to end in 1875, due to further political chaos.
The banks of Uruguay weathered the worldwide depression that started in 1873, but the government was strike down in January 1875, and Mauá Bank declared bankruptcy in February. The next government suspended payment on its London debt, and on 8 May it decreed government currency notes the only acknowledged money for legal contracts. The use of gold was forbidden and business came to a slack. Retail prices grew up and banks failed. The two surviving banks of issue – Comercial and Londres y Río de la Plata, contracted with over fifty major business firms to pay all obligations in gold, regardless of the government decree. 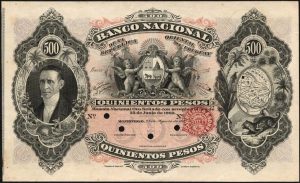 The bottom of the economy had been reached in 1875. Uruguay had aligned its silver peso on the Spanish duro and French écu of the Latin Monetary Union in 1873 , and had posted new coin ratings in October 1873, but economic and political events prevented enforcement of the new coinage until 1877. Later on, from 1877 to 1895, silver coins of 10, 20 and 50 centésimos and 1 peso were coined on the Latin Monetary Union standard.
Meantime, the paper currency was reformed in 1875. Preceding paper money was withdrawn from circulation and new, convertible government notes were issued. This new paper peso was known as peso moneda national or peso national currency.
The economy raised after 1876 and the 1880s were a phase of prosperity and amplification. Internal peace was achieved in 1884, and there was a heavy supply of foreign capital. The Reus Law of 1887 made it simply to establish new banks, the most significant of which was Banco Nacional. Until Uruguay’s neighbors – Argentina and Brazil, were indebted to use inconvertible paper currency, Uruguay kept on to use gold.
By 1889 the stream of foreign capital was drying up, and the prices paid for Uruguay’s exports were dropping. Gold has abandoned the country, and Banco Nacional run across difficulties. The effects of the Baring financial crisis in 1890 were hard for Uruguay and Argentina. Banco Nacional’s notes were denied by some of the banks, and it suspended specie payments on 5 July 1890. Panic proceeded and businesses failed – there was a run on all the banks. In 1875, the business community and the solid banks honored their obligations in gold and declined depreciated paper. The chaos calm down on 7 July, but the affairs of Banco Nacional were a hopeless mess, and the government could not meet the interest payments on its debts. The financial crisis of 1890–1893 ruined many of the commercial banks.
After Banco Nacional fell down, the Londres y Río de la Plata’s note issue accounted for over half of Uruguay’s solid paper money. It was inconceivable to have the paper currency of an independent nation in the hands of a foreign bank, and in 1896 the government established a new national bank – Banco de la República, with a monopoly of emission.

In 1896 Uruguay adopted the gold standard based on a peso oro. A patent of emission was granted to El Banco de la Republica Oriental del Uruguay and the country enjoyed a solid currency and monetary stability until WWI. 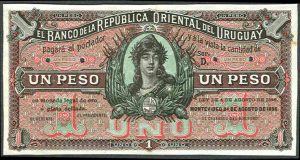