The currency of Tawain from 1895 to 1946 was taiwanese yen. It on a par with and circulated alongside the Japanese yen

In 1895, as a result of the First Sino-Japanese War, Qing China ceded Taiwan to Japan in the Treaty of Shimonoseki. The Japanese yen then became the currency of Taiwan, with distinct banknotes denominated in yen issued by the Bank of Taiwan from 1898. Only banknotes and stamp currency were issued. 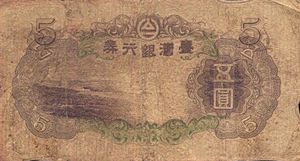 In 1945, after Japan was defeated in World War II, the Republic of China assumed the administration of Taiwan, took over the Bank of Taiwan within a year, and introduced the Old Taiwan dollar, which replaced the yen at par. 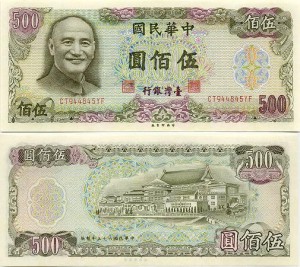 Taiwan was under Japanese rule from 1895 to 1945 and the colonial government of Taiwan issued the Taiwan yen during this period through the Bank of Taiwan. In 1945, after the Japanese Empire was defeated in World War II, the Republic of Chinaassumed control of Taiwan. Within a year, the Nationalist government assumed control of the Bank of Taiwan and issued Taiwan dollars (also known as Taiwan Nationalist yuan or TWN) as a “provisional” replacement for the Taiwan yen at the rate of one to one. The new banknotes were initially printed in Shanghai, and were shipped to Taipei. After the Nationalists consolidated their control over Taiwan the banknotes were printed in Taipei. The currency was not subdivided, and no coins were issued.

Due to the Chinese Civil War in the late 1940s, Taiwan, suffered hyperinflation. As inflation worsened, the government issued banknotes at higher and higher denominations, up to one million yuan. Because the inflation of the Old Taiwan dollar was only a side effect of the inflation of Chinese yuan of mainland China, it depreciated at a slower rate than the currency used on the mainland.

According to statute, three New Taiwan dollars is worth one silver yuan. Despite decades of inflation, this ratio has not been adjusted. This made the silver yuan a purely notational currency long ago, nearly impossible to buy, sell, or use.

In July 2000, the New Taiwan dollar became Taiwan’s legal currency. It is no longer secondary to the silver yuan. At this time, the central bank began issuing New Taiwan dollar banknotes, and the notes issued earlier by the Bank of Taiwan were taken out of circulation.