History of the Rupee is following – India was one of the first issuers of coins (circa: 6th Century BC), and as a result it has seen a wide range of monetary units throughout its history. There is some historical evidence to show that the first coins may have been introduced somewhere between 2500 and 1750 BC. However, the first documented coins date from between the 7th/6th century BC to the 1st century AD. These coins are called ‘punch-marked’ coins because of their manufacturing technique.

Over the next few centuries, as traditions developed and empires rose and fell, the country’s coinage designs reflected its progression and often depicted dynasties, socio-political events, deities, and nature. This included dynastic coins, representing Greek Gods of the Indo-Greek period followed by the Western Kshatrapa copper coins from between the 1st and the 4th Century AD.

In 712 AD, the Arabs conquered the Indian province of Sindh and brought their influence and coverage with them. By the 12th Century, Turkish Sultans of Delhi replaced the longstanding Arab designs and replaced them with Islamic calligraphy. This currency was referred to as ‘Tanka’ and the lower valued coins, ‘Jittals’. The Delhi Sultanate attempted to standardise this monetary system and coins were subsequently made in gold, silver and copper.

In 1526, the Mughal period commenced, bringing forth a unified and consolidated monetary system for the entire Empire. This was heavily influenced by the Afghan Sher Shah Suri (1540 to 1545) who introduced the silver Rupayya or Rupee coin. The princely states of pre-colonial India minted their own coins, all which mainly resembled the silver Rupee, but held regional distinctions depending on where they were from. During the late 18th Century when political unrest occurred, agency houses developed banks such as the Bank of Bengal and Bahar, The Bank of Hindustan, Orient Bank Corporation and The Bank of Western India. These banks also printed their own paper currency in the Urdu, Bengali and Nagri languages. 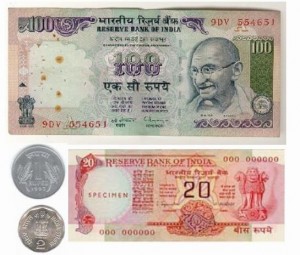 It was only in 1858 when the British Crown gained control of the one hundred Princely states, and subsequently ended the Mughal Empire, that the coin’s native images were replaced by portraits of the Monarch of Great Britain to indicate British Supremacy. In 1866, when the financial establishments collapsed, the control of paper money also shifted to the British Government. This was subsequently passed to the Mint Masters, the Accountant Generals and the Controller of Currency. In 1867, the Victoria Portrait series of bank notes was issued in honour of Queen Victoria.

After gaining its independence in 1947 and becoming a republic in 1950, India’s modern Rupee reverted back to the design of the signature Rupee coin. The symbol chosen for the paper currency was the Lion Capital at Sarnath which replaced the George VI series of bank notes. In 1996, the Mahatma Gandhi Series of Paper notes was introduced.