The history of Korean currency dates back around 3rd century BC, when first coins in the form of knife coins, also known as “Myeongdojun” belonging to the state of Yan and Gojoseon said to have been circulated. Grain coins were put to use within the kingdom for a long period of time. The kingdom of Goryeo issued its own version of grain coins and till 1097, it started specifying on the coins that the coins hold a Korean origination. Around this time, the first iron coins also started to get minted and used. Coins made from metals other than iron like copper and also silver vase shaped coins were issued in the 10th and 11th century but their circulation was limited.

In 1392, the Goryeo kingdom was overthrown and the state of Joseon dynasty was founded. The founder of the dynasty, Taejong made several attempts to bring upon improvements in the prevailing monetary system but they were not a success initially. The attempts include issuing Korean version of Chinese paper currency and issuing coins instead of importing them from China. The coins issued in Korean being unsuccessful led to the issuance of a standardized note made of black mulberry bark called Jeohwa (??/??), that was used in place of coins. The coins that were minted in the 17th century came out to be a success at last and as a result, 24 mints were established throughout Korea. Coinage formed a major part of the exchange system after this time. In 1633, “mun” was made the main currency of Korea and copper and bronze coins were issued denominated in this currency unit. It prevailed till 1892 when “yang” took over as the main currency. Yang was the first currency that used decimal system as it was divided in 100 equal fun, though it did not last long.
In 1902, won was introduced as the official currency unit replacing yang @ 1 won = 5 yang. The bank of Korea was established 1909 but soon after in 1910, Japan annexed Korea. Under Colonial rule, the country was made to use the currency unit “yen” in the name of Korean yen, which took over the Korean won at par. After the division of Korea, the state of South Korea was established and recognized in 1948, and won was again made the official currency of the new state. “jeon” was made the subunit of the currency that divided it into 100 equal parts. Bank of Joseon issued the currency for independent South Korea for the first time that too in banknotes only. 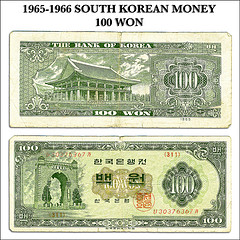 The country then had to switch over to a new currency unit named “hwan” replacing won @ 1 hwan = 100 won. Like South Korean won, this currency unit was also issued in banknotes initially but in 1959, coins denominated in hwan were also issued and were the first circulating coins in South Korea. Hwan had a peg with US dollar but with time it also got devaluated. This was the reason for the reintroduction of won in 1962 as the official currency unit. South Korean currency was still pegged to the US dollar until in 1997 when it was floated into the world market.