The origin of Japanese currency can be traced to the Wu Zhu bronze coin of China, which was introduced under the Han Dynasty around 221 BC.

Until the 8th Century the Japanese imported such coins from China. However, in 708 the Japanese government began minting their own silver and copper coins called the Wado Kaichin or Wado Kaiho, which imitated the Chinese Kai Yuan Tong Bao coin’s size, shape, and weight.

Approximately 250 years later though, the Japanese government entered into a period of decline and as they could no longer mint their own currency, begun to import Chinese currency again. Over the next few centuries, the inflow of Chinese coins did not meet the demand for a monetary medium that resulted from the growing trade and economic expansion. To meet this demand, two privately minted Japanese coins (from the 14th – 16th century) Toraisen and the Shichusen entered into circulation.
Around the late 15th Century, warlords had accumulated large debts that needed to be paid off, which subsequently encouraged the minting of gold and silver coins known as the Koshu Kin. Under the rule of Toyotomi Hideyoshi (Edo Period), gold coinage was made into a standard currency. The Tokugawa Shogunate Government then established a unified monetary system that consisted of these gold coins in addition to silver and copper.

Minting took place in the Kinza Gold mints where the present head office of the Bank of Japan now stands. Although some paper currency had been introduced previously (circa 1600), it was not until the Meiji Restoration that the first nationally accepted paper money was established. The Meiji Government wished to simplify and centralise all the various coins (holding different values) that came about under the Edo Period and thus created the Yen in 1871. The New Currency Act developed a monetary system similar to that of European countries, and made a decimal accounting system of Rin, Sen, and Yen. Thus the gold standard was adopted and the round-shaped Yen replaced the previous gold and silver coinage.

The first national Yen banknotes of the 1870s resembled US banknotes as they were printed by a US company. However, the 153 national banks of Japan of the late 19th century were to lose their authority when the official Bank of Japan was established in 1882. The yen was introduced in 1872 as part of the modernization of the Japanese currency system. The value of the yen was originally linked directly to that of gold. After extensive devaluation resulting from World War II, the Bretton Woods system linked the yen to the US dollar. In turn, when the US started to abandon strict adherence to the gold standard in the early 1970s, the yen was allowed to float in 1973. However, since 1973, the Japanese government has maintained a policy of currency intervention, and the yen is therefore under a “dirty float” regime. This intervention continues until today. The Japanese government focuses on a competitive export market, and tries to ensure a low yen value. 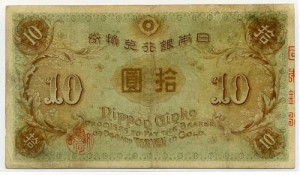 The Plaza Accord of 1985 temporarily changed this situation and led to a peak value against the US dollar in 1995, effectively increasing the value of Japan’s GDP to almost that of the United States. Since that time, however, the yen has greatly decreased in value. The Bank of Japan maintains a policy of zero to near-zero interest rates and the Japanese government has an extreme anti-inflation policy. The yen is widely regarded as undervalued, and the Japanese government cannot keep supporting this low level indefinitely. The current situation is very similar to 1998, when low interest rates also created an undervalued yen, and a few global economic shocks – relatively moderate in nature – cause the yen to rapidly appreciate. The increase in value had seriously negative effects on various industries that relied on a cheap yen.