History of currency is a wide concept. In all the history of the world currency evolution is marked with lots of changes. First of all we were trading with commodity money. Many cultures around the world eventually developed the use of commodity money. Ancient China and Africa used cowrie shells. Trade in Japan’s feudal system was based on the koku – a unit of rice per year. The shekel was an ancient unit of weight and currency. The first usage of the term came from Mesopotamia circa 3000 BC and referred to a specific weight of barley, which related other values in a metric such as silver, bronze, copper etc. A barley/shekel was originally both a unit of currency and a unit of weight.

After commodity money we were passing through standardized coinage. Coinage was widely adopted across Ionia and mainland Greece during the 6th century B.C., eventually leading to the Athenian Empire’s 5th century B.C., dominance of the region through their export of silver coinage, mined in southern Attica at Laurium and Thorikos. A major silver vein discovery at Laurium in 483 BC led to the huge expansion of the Athenian military fleet. Competing coinage standards at the time were maintained by Mytilene and Phokaia using coins of Electrum; Aegina used silver. It was the discovery of the touchstone which led the way for metal-based commodity money and coinage. Any soft metal can be tested for purity on a touchstone, allowing one to quickly calculate the total content of a particular metal in a lump. Gold is a soft metal, which is also hard to come by, dense, and storable. As a result, monetary gold spread very quickly from Asia Minor, where it first gained wide usage, to the entire world.

Fiat money are next in historical plan. Fiat money refers to money that is not backed by reserves of another commodity. The money itself is given value by government fiat (Latin for “let it be done”) or decree, enforcing legal tender laws, previously known as “forced tender”, whereby debtors are legally relieved of the debt if they (offer to) pay it off in the government’s money. By law the refusal of “legal tender” money in favor of some other form of payment is illegal, and has at times in history (Rome under Diocletian, and post-revolutionary France during the collapse of the assignats) invoked the death penalty.
Governments through history have often switched to forms of fiat money in times of need such as war, sometimes by suspending the service they provided of exchanging their money for gold, and other times by simply printing the money that they needed. When governments produce money more rapidly than economic growth, the money supply overtakes economic value. Therefore, the excess money eventually dilutes the market value of all money issued. This is called inflation. 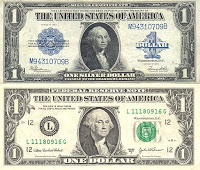 These days no one can live without credit money. Credit money often exists in conjunction with other money such as fiat money or commodity money, and from the user’s point of view is indistinguishable from it. Most of the western world’s money is credit money derived from national fiat money currencies.

In a modern economy, a bank will lend to borrowers in excess of the reserve it carries at any time, this is known as fractional reserve banking. In doing so, it increases the total money supply above that of the total amount of the fiat money in existence (also known as M0). While a bank will not have access to sufficient cash (fiat money) to meet all the obligations it has to depositors if they wish to withdraw the balance of their cheque accounts (credit money), the majority of transactions will occur using the credit money (cheques and electronic transfers).